Posted at 13:14h in Uncategorized by rhum-and-sens

For decades, rum took on different names such as tafia, guildive, rumbellion, etc. It was widely used in the navy to enroll future sailors but it was also the cause of naval battles. It was a good remedy for scurvy and was given the name grog.

Then came the 14-18 war, rum was adopted by soldiers to help them fight the harshness of war and winter too.

It was from the 1st World War that the consumption of rum grew and became the first favorite drink of the French. Indeed, rum was very popular for “duck” (rum + coffee) after a meal but also in baking to flavor cakes and other dishes. 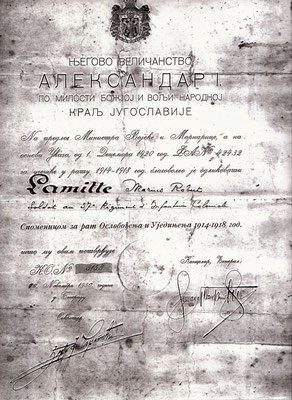 I therefore pay tribute to my grandfather Marius Robert Lamitte who fought in the Balkans. He even received a certificate of thanks from Prince Regent Alexander II of Serbia.

However, the 2nd World War saw its consumption greatly reduced since the French West Indies were cut off from the rest of the world and no boat could leave the port to deliver foodstuffs, including rum. Thus, he was a hostage in spite of himself.

Sold on the black markets by alcohol traffickers, rum will remain at the top of the list of favorite alcohols. It also competed with other alcohols and was so jealous of it that a quota of colonial rums was considered and implemented after the 2nd World War. (Decree of May 12, 1958).

Over the years, rum gained in quality and worldwide recognition to become the most popular drink today.

Alcohol abuse is dangerous for health. To consume with moderation !

Please verify your age to enter.